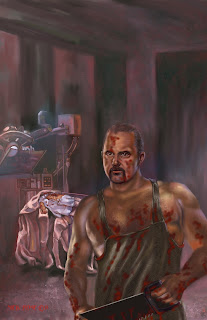 Hello my friends. Here is the artwork for my last painted cover for a commercial market. If you see a cover after this one, it will because I sold the rights to an existing piece. I do have one more commercial piece to do, and it will also feature Kane Hodder (Jason, Hatchet, Ed Gein, and so many other horror movie legends) as this one does.
This painting featuring him is for my fiance's book "The Bone Extractor" and there will be prints available from Kane and me. You can order one from me through my email ( or the Facebook group or fan club) and Kane will have them at personal appearances. I will be doing appearances in the future, after I am sure my health is stable. For now, it's looking pretty darn good. It will be able cool as hell to hang out with Kane and Chainsaw and conventions and some others I have yet to name. April (Chainsaw) is going to become one of my muzes and I will be painting her in ways other than just her movie roles. She will be featured right up there with Suzi Lorraine and Tilly Rivers.
This painting was a real challenge because of the very limited photo's of Kane I have to work with at the moment. I was actually the model for his body. For those of you that are saying BS! here is the pic....

At first I was trying to piece together different photo's I have of him to get the pose, but no matter what I did, it was coming out stiff. Madison suggested I pose for the body, and I did.
The sad thing is if you look closely at my chest, you can see where they shaved me in places to put those patches on to monitor my heart when I went through a whole series of test a couple of weeks ago, and the great news is, my heart is very strong and I should be around for MANY years now to really burn up the art world, and that is my plan.
I want you all to know that you letters and comments of support have meant the world to me. I will still be doing dark things, but light as well and I will be doing them mostly with brush and oils, although I am not going to rule out digital. It does have it's good points. The above painting was done with both oils and then scanned and finished with Painter.
I have been very fortunate this last year and because of that I am able to make the move that I am able to. A couple of months ago I purchased the CS5.5 Masters collection. It cost a ton, at least to me, but it has every program I could ever dream of needing for doing everything to making and editing music, video's, art , the programs I need to format books and magazine which will be important in the future and so on. A few of the programs, I don't have a clue to what they are for. I have been wanting to play with Adobe Illustrator but am making myself wait until I have the commercial work done. The new version of Photoshop does everything including wiping you butt. lol. Just kidding about that part.
I have to read the manuscript for Kanes book written by Mike Aloisi and in a couple of days I will get ready to do that piece. I want to make it photo real looking almost, so I will probably be doing it in Painter. I haven't made my mind up yet.
As each day passes I am coming closer to the growth I have been talking about, and I am so ready to embrace that and just explode with new paintings. But I know myself better than anyone, and I know if I don't get this last piece under my belt first, it may never happen, so.
I am certain that once I start feeling like my painting is moving into the direction that I wanting it to, I will finish that steampunk painting I started a while back. The pencil work is very popular and put a lot of food into the house, so I want to make sure when I paint it, I do it the justice it deserves.
I want you all to remember something, back in 2005, I was told I had very severe health problems and probably wouldn't live long. I had gave up and knew that death was coming for me. Then a miracle happened, a living Master reached out to me and offered to teach me, and because of that I got the will to live again and fight as if my life depended on it, and it did. Then who I consider to be a second Master helped me as well, and this last year in secret another one helped me under the conditions I never named them because of the backlash it would cause them from others that had begged this Master to help them. This is the main reason I am changing up and leaving Illustration. This Master taught me what the first two didn't, heart and soul.
That being said now, I know a lot of you will be guessing at who it was, but I gave my solemn to take it to the grave with me, and I will. I don't know how long it will take, but I do know these three Masters believe in me, Madison and a very few friends I hold in my heart and because of that I will become whatever it is they all believe I am capable of. Never forget, I did come back from the dead. I was given another chance and I am not going to waste it.
Love and Hugs forever my friends. "May the Darkness comfort you"
Posted by Nick Rose 2 at Thursday, July 21, 2011 No comments:

Hello my friends. I hope you are well and happy. I have some news to share with you that may surprise you and the reasons I have made the decision to do what I am going to do. It has been coming for at least a year now and I have hinted at it on a few occasions but I can not put it off any longer and I am getting very excited about it. An that is the main thing, It has been a very long time since I have been excited about my art, or better said, Illustration up to this point. I am leaving the Illustration market for good. I have a piece to do to promote Kane Hodder's book and I am going to do it digitally, and after that the only cover or Illustration work I will do is for Madison. No others, I don't care what it is or how much money I am offered. I am done with it.
This last year I have really lost all interest in doing this type of work. I actually have gotten to the point where I dread coming into the studio because I am just sick of doing things that I am not inspired to do anymore. I am sick of restrictions or someone telling me to do it this way and not this way. I have done this for 33 years and I am just simply burnt out on the whole thing. From now on I am going to paint anything my heart desires, whether it be flowers or a skull. It might be a dragon, or just the sky. I am even thinking of doing some partial nudes. My goodness, I have some drop dead gorgeous models posing for me, so why not? Beauty is something that should be captured forever, no matter what it is. My mood will determine what I paint . I am looking to paint "Loosely" instead of so damned detailed all the time. I would love to sit down with a canvas in the morning and be signing it when the day is done. If I think of the painting as a whole instead of every single detail, then I can and I will.
My road has been leading to this. If I had not been so hardheaded and listened to Madison, I would have done this much sooner. Another big factor she keeps reminding me of is that I am really disabled folks. I have COPD, and that alone is a bitch, but then you put diabetes's, high blood pressure, and ulcertive colitis on top of it, well hopefully you get the idea. Some days I fell great, others I don't want to do anything but watch movies. When your working on deadlines, this is not good and the pressure can really get to you and in my case cause severe depression. I am constanly setting myself up for failure like this. One day I feel like I can conquer the world and start saying to myself that I can get this done tomorrow and keep on trucking. When the next day comes and I feel like crap, I get depressed because I feel like I let myself and everyone else down.
This week I have been doing what Madison told me to. I have been having fun. I am doing what I want when I feel like doing it. Watching movies, playing video games and just being happy and I can feel that creative feeling starting to come back. I haven't felt creative since I did the "Dark Fairy" painting. An since I have made this decision and been having fun, I have been feeling even better. I haven't had to take a nap for the last week and I've been working out every day.
So hopefully if you are an art lover, and not just a horror lover you will embrace the new work if it is good and keep following my work. Hopefully next time around I will have something to show you. Love and Hugs. "May the Darkness Comfort You."
Posted by Nick Rose 2 at Tuesday, July 12, 2011 No comments:

The Blog of Internationally famous Dark Artist Nick Rose.
"Warning: The unauthorized reproduction or distribution of this copyrighted work is illegal. Criminal copyright infringement, including infringement without monetary gain, is investigated by the FBI and is punishable by up to 5 years in federal prison and a fine of $250,000."

Where to buy Nick Rose Art

Where to find me and other things