Hello my friends, first things first. I have decided to let some companies put ads on the blog.  The first one has. If you scroll down the right hand side, there is one just under the counter. If you click on it, a penny goes into an account for Wicked Kitty Studios at the end of each year.  This money will go to the Shriner's Hospital for Children, so please get in the habit of clicking on the add every time you come to the blog. It is a wonderful way for us all help out children in need.
I am going to have to ease up on the lessons till after Halloween. I am swapped with work right now, and short deadlines. I will still try to share tips until I can get back at making the lessons. They generally take me a day to do.
I have some new works to share with you.  This was a piece I did for performer  Sally Zom Bie. 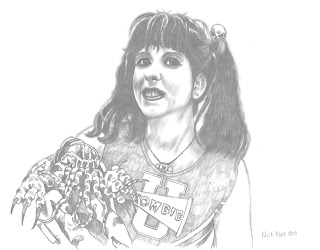 and up next is my first oil painting in almost 3 years. The paint is still wet, so a photo of it will have to do for now. I got a huge reaction from my friends on Face Book.  They said that oil is my element. I am starting to think that is true and I am starting a new oil today. In the first blog after Halloween, I will show you the step by step of bringing it to life. I am going to put off the color studies for now, because I am thinking of what Todd taught me about learning values before adding color.  So i am thinking I should do the same for you. 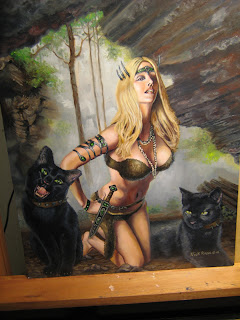 and before I forget, the model is Suzi Lorainne and the two beast are her cats Loki and Monki. The next time I paint Suzi, she will be "Vamprilla"
The next 2 paintings I am doing are based on old ideal's that I have tried to do several times through the years but lacked the skills to do it right. I am hoping my skills will be good enough now. The first one I am starting today (and will be used in the next lesson to show you step by step) is called "Hellcrow"  The one after that is based a painting I have done at least 3 times in the past called "Heaven and Hell" and will feature Horror Icon Dia Green, and their is some major news that goes with that, but I will tell you all about it when the time is right.
My health has been awesome. I have went a whole month without feeling bad. That is a new record for me. The insulin, exersice, and watching my diet is really paying off for me.  I really appreciate all the letters and notes you have sent me praying for me and my health.  That is just so awesome (my new favorite word) of all of you.
I'm sorry I don't have much for you this time, but please bare with me, and we'll get back on track after Halloween.  Peace and Blessings. "May the Darkness Comfort you"
Posted by Nick Rose at Monday, October 18, 2010 2 comments:

Hello my friends.  I am glad to be with you once again. As promised, I have the second part of flesh color mixing for you, with pictures.  The bad thing is that I am not a good photography, so hopefully you can bare the photo's I took for you.  But first other things that are going on. I posted a special blog a couple of days ago with the interview I did with Tilly Rivers for Main Street Magazine, who is also an awesome model who is modeling for me as well.  Darn, I am getting all these very high profile and beautiful women modeling for me.  We have  Madeline Frost, Suzi Lorainne, and now Tilly Rivers.  Here is a picture of each of them in the order I named them.


Here are 2 of Madeline, one of the pictures I shoot during a photo shoot with her and Darius. 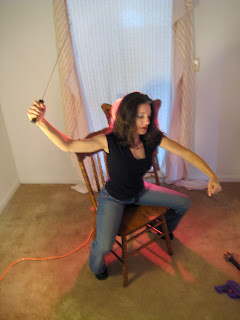 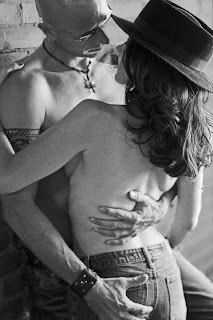 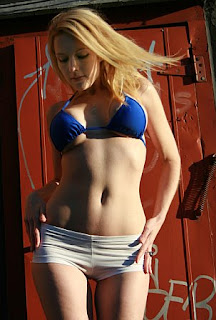 and last, but no means Tilly Rivers. 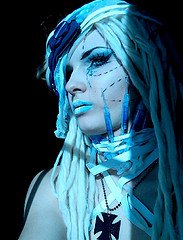 If you want to see more pictures of them, look on links to the right of the page and you will see a box that says "Models I use".  These are some wonderful people to work with and I would recommend them to any artist in search of models.  Now if a fellow can't do some good paintings with wonderful models like these to work with, he just doesn't have what it takes yet. lol
I wanted to showcase the lady models today, and I will show case the fellows on another blog.
Now to what we are all here for, art. I hope you all remember the lessons from mixing flesh tones part one, because here is part two.  If you remember the mixture I told you to start with as your base, these pictures will help. I did have one problem though.  It had been 2 years since I mixed up the base color, so it is a little off. I needed to add more yellow ochre to the mix. So what i did was add it to side of the palette and added it to the mixes as I used it. I am sure that you will that you will have the same problem from time to time. Luckily I made the chart below from the last oil painting I did 2 years ago, if you click on it and enlarge and print it, it is the exact the way the paints should look after the mix. I also added sap green, yellow ochre and orange.

The first 2 lines are the actually flesh colors.  Put your hand beside the chart, and you will be able to find these colors in your skin.  The next series of pictures are how I mixed the colors and made them to the value scale. I am sorry that the pic's are a little fuzzy, but you still can get the ideal. 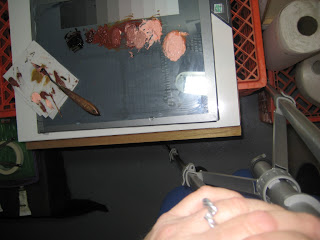 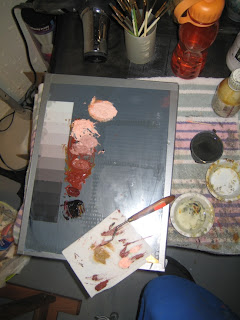 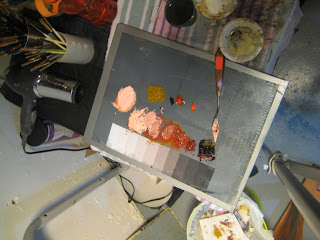 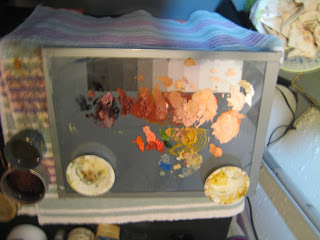 The colors I added are orange, sap green, red, blue and a neutral gray.  It the second picture you can see where I was mixing colors on the pallet, basically adding yellow ochre to the flesh tones as I went.  The next picture is the painting still in progress, but it will give you an ideal of how the colors work together to make flesh. 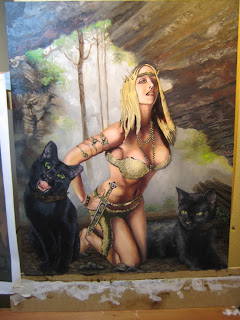 There are still a lot of things to finish on the painting, so please don't be judgemental until I am done which I am hoping will be this week. Depends on how the week goes.
The only time you ever use pure white, and I prefer zinc white is for the gleam in the eye or on a tooth and there are times that you want to use a black, then use Payne's gray. It is as black as black but will not muddy up your other colors when you blend, other wise use the dark I thought you last week for your flesh tones.
Next week we will talk about how to paint and a little on color and how to mix and use them. By all means, if you do not understand what I am telling you, send me a comment or a letter and I will do my best to explain it better.  So until then my friends. Much Love and "May the darkness comfort you."

Hello my friends. I am so glad to be here again.  Today we start learning how to mix up flesh colors to paint with. I am having to do this in two parts. In the next blog, I will have pictures to take you step by step through the process that I explain today. But first, lets talk about cool stuff. Below is a new painting I did for the writer of over 80 books, Author Charlee Boyett-Compo.  She is also the president and founder of a Fantasy Writers Association  with over 450 members.  She commissioned this piece for a series of her books based on Reapers in the old west.  This one is called "Reapers Justice." I hope you enjoy. 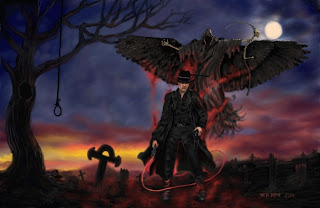 The Blog of Internationally famous Dark Artist Nick Rose.
"Warning: The unauthorized reproduction or distribution of this copyrighted work is illegal. Criminal copyright infringement, including infringement without monetary gain, is investigated by the FBI and is punishable by up to 5 years in federal prison and a fine of $250,000."

Where to buy Nick Rose Art

Where to find me and other things